At the first day of the European Championships in Warsaw the category for men U60kg will take place with a number of favourites. The only Olympic medallist in Rio (Champion and Beslan Mudranov) is missing, but there’s enough competition remaining with Orkhan Safarov, the world number one from Azerbaijan, who lost the final last year to Walide Khyar of France.

Orkhan Safarov belongs with the best judoka in the world at U60kg; is resume is nothing short of impressive. He won the only Azerbaijan (silver) medal at the European Games in Baku. He won a World bronze medal in 2013. He won IJF Events in Baku, Tbilisi, and Abu Dhabi and added the World Masters in 2016 in Guadalajara. He was fifth at the Olympic Games in Rio. He won bronze at the Grand Slam in Paris in 2017. He won a bronze medal at the Grand Slam in Baku in 2017.

However, Amiran Papinashvili will be sharp, as well. Although he recently lost in the final in Tbilisi against Lukhumi, his experience will count. Amiran Papinashvili won bronze at the World Championships in 2014. He was the European Champion in 2013. In fact, he won four European medals in a row. He was European Team Champion with Georgia in 2014. In 2015 he won the Grand Slam of Abu Dhabi. Since 2009 he has won 2 Grand Slams, 3 Grand Prixs and one World Cup. He was also fifth at the Olympic Games in Rio. This year, he has already won bronze at the Grand Slam in Paris and silver at the Grand Prix in Düsseldorf.

Fran Garrigos of Spain might have a podium chance. He is seeded third in Warsaw, but no guarantees are given as there is a close race to the top. Francisco Garrigós won the Grand Slam of Abu Dhabi in 2016. He became World Junior Champion in 2014 in Miami and was already European Junior Champion Judo in 2014 in Bucharest. He won the European Open in Lisbon (2014) and took bronze in Rome and Grand Prix of Zagreb in 2015. Fran Garrigos was fifth at the European Games in Baku. He won the European Open in Lisbon in 2017.

Bekir Ozlu did some good business at the Grand Prix with silver in Antalya and is fourth in the list of seeded athletes. Bekir Ozlu nee Betkil Shukvani was born in Georgia but changed to Turkey in 2015. For Georgia he won European medals U17 and U20 and silver at the Senior European in 2011 in Istanbul. He won the European team title with Georgia in 2007. He won World Cups since 2011 and the Grand Slam of Rio in 2012. 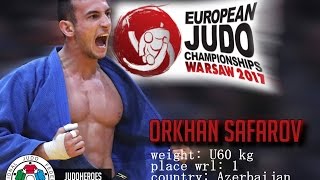