One of the contributors to JudoInside, Mariel Ang asked herself the question why Shohei Ono is such a dominant judoka. We’ve published her analysis and feel free to give you opinion in our Facebook. Like it, share it, or respond to the analysis. You’re athlete analysis at JudoInside.com? Make sure it’s worthwhile reading with your sharp analysis. Give the Insiders, your Inside story.

Shohei Ono is undoubtedly one of the most dominant judokas in the lightweight division. Unbeaten for two years and holding one of the highest ippon rates in judo, Ono successfully won Japan’s first gold medal at the Olympic Games. He has also won two world titles and is no fluke, beating some of the best of this decade: Ugo Legrand, Wang Kichun and Riki Nakaya.

Many wonder the secrets to Ono’s success. The veil to his success will never be fully unmasked, but he has showcased signs of the work behind his victories.

Ono’s coaches are some of the world’s best, both as coaches and as competitive judokas.

At Tenri University, his home base, he has Yoshimi Masaki and Takamasa Anai as his trainers for the Olympic Games. At the Japanese team, the fleet and pedigree of his coaches are even higher: Yusuke Kanamaru, and head coach Kosei Inoue.

Inoue is very strict on discipline. He is not hesitant to bar fighters from tournaments and suspend them if they are tardy or have committed offenses like excessive drinking, like in the case of one of Ono’s teammates.

He reiterates that no judoka is invincible, even if they are as successful as Ono, who was suspended by the All Japan Judo Federation (AJJF) for hazing. This brought Ono back to the ground to recoup his focus and discipline.

He won his second World title the year after his suspension in 2015.

Many judokas who are at Ono’s level express arrogance at times by challenging or taunting rivals. When a former international rival called Ono out in his native Japanese to meet him at the Olympic finals, Ono chose not to respond.

His defense is his attack

Ono is amazing at counters. Some fights it can seem like one move from his opponent can turn into a score for Ono. For example, during his bout against Sagi Muki at the quarter-final in Astana, he scored 3 yukos and a waza-ari because he countered Muki’s skills repeatedly.

Ono occasional defensive position has turned advantageous for him. Once the opponent has a dangerous deep grip on his back or collar, he capitalises on it for a throw.

For example, against An Changrim in the semi-final in Astana, An would be on the attack with a more controlling grip for a seoi nage, but Ono would then go into a defensive position with a sudden collar grip and ura nage.

This skill has also resulted in Ono winning all four bouts against An.

Although Ono is not especially known for his newaza, he has some of the quickest submission skills in the division.

When attempting a turnover on the ground, he switches to a shime-waza even while his opponent is in a turtle guard. Like his defensive attacks, during his first fight in Chelyabinsk, his opponent attempted a tomoe-nage which he blocked with an armbar.

Ono’s technical superiority over his competitors with big throws like uchi mata and osoto gari is to neutralise his opponent’s physical strength or bigger stature.

He always fights for ippon and renders it synonymous to his style of judo.

Ono said: “Overseas fighters tend to be bigger but even if you're smaller, you can do big judo and be successful pursuing your style.

“What I wanted to demonstrate was that my style is the strongest judo style.”

Ono’s national rivalries, and having to constantly fight for that spot in the national team with his countrymen conditions a desire for dominance.

At one time, Japan had a choice between three world champions: Ono, Nakaya and Akimoto, of which all were still at top game. Ono’s rivalry with Nakaya went on for four years.

With the high level that Ono has to challenge locally, it has come to a point where to be world and Olympic champion, he had to defeat his Japanese compatriots first.

Ono is undoubtedly some of the lightweight division’s best, if not one of the best judokas of his generation, pound-for-pound. I’m sure we’ve only seen the tip of the iceberg to what truly makes him a dominant judoka. There’s definitely much more to his judo. 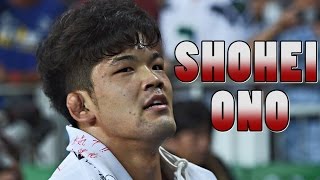