Two top level athletes were in the final of the Grand Prix: Beka Gviniashvili and Khusen Khalmurzaev. Almost a year ago both won the Grand Prix in Samsun in different weight categories; now, both competitors stepped onto the tatami at U90kg. Their last encounter was in 2012 at European Junior Championships when the Georgian won the contest. As it happened, the 2017 edition of their matchup left the judo fans as winner, as well.

In Sunday’s final, both were equal and tried to force a score. Nine seconds from the end, they picked up the pace and Gviniashvili benefited by wazari for a tai-otoshi and secured the gold. Both showed their respect after the match that could have gone either way.

In the first bronze medal bout, both Daiki Nishiyama and Nikoloz Sherazadishvili kept each-other in balance. In the third minute, Nishiyama took the victory by osaekomi and secured his third bronze medal ever in Düsseldorf. The German fans enjoyed the performances of 19-year teen Eduard Trippel. Germany’s super talent reached the semi final and is in great shape. He recently won both the German title and Belgian Open. Against Olympian Mihael Zgank of Slovenia, the score was 1-1 in wazari with only half a minute remaining, but he gave too much space in the last ten seconds to Zgank, who captured the bronze.

Belgian Toma Nikiforov showed his great form. He booked another victory after he caught Aaron Wolf by surprise in 25 seconds with a textbook strangle. It has been nearly three years since Nikiforov won an IJF World Tour event. In 2015 he won bronze at the World Championships. The vice-European champion finished ninth at the Olympic Games, but recently showed his class at the Belgian Open.

The all Japanese final +100kg was won by Kokoro Kageura who led the match quickly against vice Olympic champion Hisayoshi Harasawa. Despite two penalties, Harasawa couldn’t break through Kageura’s defense and left the tatami with silver. There’s a huge battle going on for the best position in the heavyweight class and Kageura is in the midst of the fray with the best: Harasawa, Ojitani, Shichinohe.

Both Barna Bor (HUN) and Lurii Krakovetskii picked up two penalties in their bronze medal bout, so someone had to force the victory. It took more than seven minutes before Bor was penalised for the third time for a wrong grip but that decision was overturned and it may have given Bor a mental boost. One minute later, after 4:09 of golden score, the experience Hungarian finished the job with a drop seoi nage and shared his 15th IJF World Tour medal with his teammates.

Olympic Champion U100kg Lukas Krpalek (CZE) made his comeback in Düsseldorf. After a turbulent period, he enjoyed being on the tatami at world level again and started the day well, reaching the semi final where he lost to Kageura. In the bronze bout Krpalek met with Yerzhan Shynkeyev who scored after two minutes. The relatively small Kazach was chased by Krpalek, but the Czech couldn’t gain an upper hand or score. Krpalek was untidy and only a third penalty could bring him the victory, but despite the huge pressure Krpalek couldn’t be satisfied in the end.

Iryna Kindzerska is finally going to take home the jackpot. Twenty-five is not too old for being the best in judo. The Ukrainian heavyweight, however has been fighting at the world-level for seven years, but never won despite her 19 World cup medals, including 9 in the IJF World Tour. She lost her two finals in Astana and Tashkent, but in Düsseldorf she booked her biggest career win. Her nemesis Megumi Tachimoto was defeated in Germany, the country that is her second love.

The 25-year old Ukrainian was successful as a cadet since 2007; ten years later she, has finally managed to convert her gold at the EYOF (European Youth Olympic Festival) into gold at the highest level. Kindzerska was finally able to beat vice World Champion Megumi Tachimoto, who bested her three times before. Kindzerska gave Tachimoto a really hard time in the final. She didn’t allow Tachimoto to score in regular time and Kindzerska secured the victory two minutes in the golden score. Kindzerska feels well in Germany where she joins her club every now and then and Germany paid back her investment over years.

Larisa Ceric took the bronze medal after her opponent Kristin Buessow (GER) was disqualified after a third penalty. Rochele Nunes of Brazil led against Akira Sone of Japan, but the match slipped away and Sone scored three times, finishing the match with ippon with osaekomi. The 16-year old was in the final of the Grand Slam last year and is obviously an amazing new heavyweight talent.

2015 World Champion Mami Umeki won the gold in the final in Düsseldorf against French Madeleine Malonga. The French woman led the match by wazari, but Umeki came back after two minutes in the match and converted her groundwork into osaekomi.

There was another bronze for Slovenia today as Klara Apotekar defeated Karin Stevenson (NED) in their last contest. Rika Takayama won the bronze after she caught Natalie Powell (GBR) by osaekomi. With 14 athletes, this category had the fewest competitors. 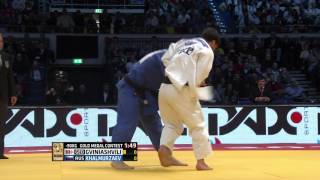 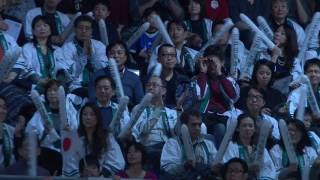 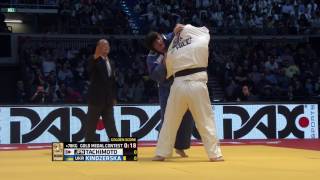