This weekend, high-quality judo will be in the Austrian city of Oberwart and the Italian capital, Rome. The European Open in both cities will offer some fine competition with, obviously, a large contingent of Italian men in Rome and some of the best female fighter from Austria.

All eyes will be centered on the performance of Kathrin Unterwurzacher, the highest seeded Austrian on her team. She will be fighting in the U63kg category where she may meet dangerous opponents, such as Aimi Nouchi (JPN) and Lucy Renshall (GBR). Japanese super talent Miho Minei cancelled her participation due to an injury.

Last year, when the men fought in Austria, the home crowd had something unique to celebrate: the victory of their own Ludvig Paisher. Also, in the last women’s European Open edition in Obverwart (2015) the fans were spoiled with two gold medals from Bernadette Graf and for Kathrin Unterwurzacher.

Strong women in other categories include Jeong Bo-Kyong, the winner of the Grand Slam in Paris last week at U48kg, Yuki Hashimoto (JPN, U52kg), and Pan American women U57kg: Marti Malloy (USA) and Canadians Beauchemin-Pinard and Jessica Klimkait. Also in the category will be Momo Tamaoki, who is part of a large Japanese team that is traditionally successful in Oberwart.

Canada’s Kelita Zupancic will strive for gold to show her friend Travis Stevens and her dog that she promoted in social media this week. But the former number one of the world will face severe opposition from the new European generation: Taeymans, Rodriguez, Mansour, Heleine and Howell, back on the tatami. However, Yoko Ono may take a medal again, like in 2013.

Joó Abigél (HUN) holds the highest seed at U78kg, but will face very strong opposition from the Japanese and Yujin Park (Korea). In both U78kg and +78kg, the Japanese and Koreans have good entries. Traditionally the podiums have been be Asian oriented. 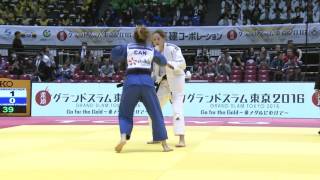