Dutchman Michael Korrel claimed the Dutch title U100kg, his second in a row and third in total. Despite the absence of all Dutch Olympic athletes at this national championship, Korrel saw the essence of this precious national title. Korrel, who was present as preparation partner for Frank de Wit, Noel van ‘t End and Henk Grol, makes his own choices.

One month ago he moved to the national training centre in Arnhem, and on Sunday he won the title in a juicy final against Simeon Catharina, the youngster who’s is knocking on the door in this category U100kg. But in the final Korrel scored two wazari, and finished with persistent groundwork.

Gold U81kg for Jim Heijman, who didn’t win the coins at the European Junior Championships in Malaga, but was paid out afterall with this Dutch title against Jan Reijntjens. In this category U81kg Guillaume Elmont won eleven straight titles in a row (2001-2011). Elmont retired this year and the former World champion was honoured for his career and received a sixth dan grade. Elmont couldn’t imagine any excuses for the absence of most Olympians.

The surprising gold medal U90kg was for Mistral Janssen who defeated Dax Biesbrouck in a great final. Janssen, will soon come out for Belgium, details are about to be finalized soon. Janssen was the eighth different winner of the Dutch title since Mark Huizinga won his last title in 2008.

In the women’s category U70, Natascha Ausma had a golden chance to take the title. The World Junior bronze medallist was caught by surprise when 27-year old Antoinette Hennink showed her skills and scored ippon. Hennink captured her third title, for the first time U70kg, which is a learning moment for many ambitious youngsters, technique does make a difference. Sad for Ausma who suffered another elbow injury knowing it takes time to recover. An interesting category where Bolder and Stam moved abroad, Polling goes to Italy, whether or not competing for the Netherlands. Sanne van Dijke and Natascha Ausma are ripening on a bumpy road.

Without Guusje Steenhuis and Marhinde Verkerk two world players were missed, but 2015 European Junior Champion Larissa Groenwold and Madrid European Open winner Karen Stevenson are the ones to takeover the golden chances. In their final Karen Stevenson showed to be the better judoka today. Groenwold seems to be the candidate for the European U23 Championships.

The heavyweight title was for the second time for Martine Demkes, in the final against 2013 and 2014 winner Lena Buseman.

Some of the Dutch top athletes will enter the Arena at the Grand Slam of Abu Dhabi in October and the senior newcomers will show their faces at the European Cup in Belgrade and European Open in Glasgow this month. 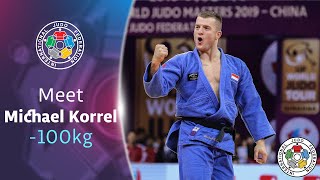