One of the best days for Uzbekistan judo was the opening day of the Paralympic Games in Rio. With two gold medals Uzbekistan stole the show. Never in the Paralympic history Uzbekistan won a gold medal, actually just one medal in London. Today Uzbekistan claimed three medals and won two Paralympic titles. Sherzod Namozov defeated Makoto Hirose (JPN) in the final U60kg and Utkirjon Nigmatov captured the second gold when he overcame Bayram Mustafayev (AZE) in the final.

In the women’s category U52kg Sevinch Salaeva won bronze. The gold medal was for French Sandrine Martinet who was congratulated by Teddy Riner in social media. Martinet took a well deserved gold medal after a wazari victory over Ramona Brussig, the German Paralympic legend. Today was her fourth consecutive Olympic final. She defended her Olympic title, but also Martinet is a legend, she was in two Olympic finals, in 2004 and 2008, both ended in silver. Not this time, Rio was her lucky city and she had learned how to defeat her German opponent and at her likely last Olympic Games he captured her most precious medal and couldn’t stop cheering.

The Brussig sisters who both defended their titles, are twins in every respect. This time both sisters won silver as also Carmen Brussig forgot to take the crown to Germany. Although also her final Brussig had no chance against Chinese Li Liqing who was overhelmed after her ippon victory. Li continued the successful streak of China with gold at the opening day. In 2012 China won one gold medal, in 2008 in Beijing four.

Learn more about the winners

Liqing Li of China captured the Olympic gold medal at the Paralympic Games in Rio.In 2014 she won gold at the IBSA World Championships in Colorado. In that year she also won the Asian Para Games in Incheon.

Sherzod Namozov of Uzbekistan is Paralympic champion of 2016 in Rio. He won judo bronze at the 2014 IBSA World Championships in Colorado, USA and won the IBSA World Cup Eger in 2015 fighting U60kg. IBSA World Ranking leader U60kg 2016, he was first seeded at the Paralympic Games in Rio where he won the first ever Paralympic gold medal for his country.

Paralympic judoka Utkirjon Nigmatov of Uzbekistan took the Olympic title at the Paralympics in Rio. He won judo silver at the 2014 IBSA World Championships in Colorado, USA. He fights U66kg. In 2015 he won the IBSA World Games in Seoul. At 8 September Nigmatov and Namozov wrote history by winning two gold medal in one day. 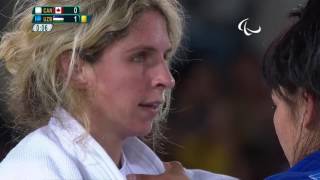 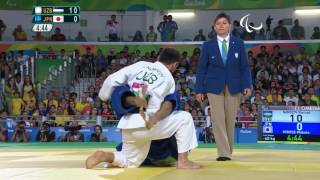 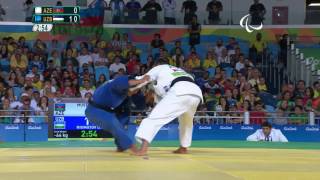 26 Aug 2021 11:45
Judo twins Ramona and Carmen Brussig together at Paralympics