Ilse Heylen got an invitation by the IJF to compete at the Olympic Games in Rio de Janeiro. However without any preparation she cancelled this invitation and is in fact back to the day she missed the Olympic Games. The wounds are open again after her missed chance for her fourth Olympic Games, but the IJF simply invited Heylen who's first on the list of the continental quota. It's not an IJF demand to replace an injured athlete but a procedure to stick upon the Olympic quota.

Heylen lost at her last qualification event in Astana at the Grand Prix at 13 May the chance to qualify for Rio and retired immediately from international judo. Two year’s long she was on course for her latest trick, but in the last moment she got passed by her competitors and quit her sport.

“Slowly we’ve dealt with this huge disappointment, we started the preparation for a big farewell part at 26 November in our home town” her husband Olivier Berghmans said. “Until yesterday evening when the invitation reached us to come to Rio, but it opened the wounds of missing the Games. It makes no sense to come to Rio, she stopped training and it’s impossible to reach her weight with four days to go with a flight of 12 hours ahead as well. You won’t go to Rio for the show. If you go, you need to be in top shape. After the bronze in Athens in 2004, and seventh place in Beijing and fifth place in London, it’s not an option for Ilse to be just present in Rio.”

The IJF had to find a replacement to stick to the quota after an athlete U66kg got injured in the last moment. Also other athletes were invited after Heylen declined but so far unsuccessful to fulfil the Olympic quota. The continental quota go over all categories, so not just athletes from U52kg are invited also U81kg, but so far the invitations haven't been successful yet. Today at 16:00 local time is the draw and we will know more. 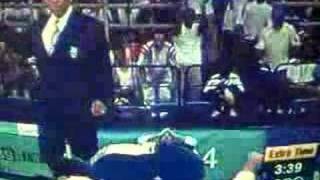