Tina Trstenjak is known as one of the most stable judokas around. No show, just judo, not always first, but gold when she demands it. Trstenjak is vying to be the successor of Urska Zolnir and keep the title in Slovenia. On 9 August we will know the answer to the succession.

2016 European champion Tina Trstenjak of Slovenia won the World title in 2015 in Astana. She won World bronze in 2014 and silver at the European Games, raising her tally to four European medals in total. She is part of the successful team of Slovenia. In 2015 she won the Grand Slam Paris and Grand Prix Düsseldorf in 2016.

French Clarisse Agbegnenou is the 2014 World Champion and was runner-up in 2013 in Rio de Janeiro and 2015 in Astana. Agbegnenou is double European Champion, winning in 2013 and 2014, and was world number one in U63kg. She won European and World Team titles with France. Agbegnenou won the Grand Slam of Paris three times from 2013-2016. Of all the participants in U63kg, she is the only one who won a medal at the last three World Championships.

Miku Tashiro is the World bronze medallist in 2014 and 2015. Tashiro won the World Junior Championships U20 in 2010 in Agadir. She was also World U17 Champion in 2009. Tashiru was All Japan Champion back in 2015 and had won the IJF World Masters in 2015 and 2016, alongside a silver at the Grand Slam Paris in 2016. Tashiro wants to bring the title back to Japan where it was since 2004, following up from Ayumi Tanimoto, now coach of the new generation.

Yarden Gerbi is Israel’s judo pride. She won the world title in 2013 and earned a silver in 2014. She won 3 European medals and won the European Club title with Galatasaray. Gerbi won several World level events starting from 2009. She began 2016 with gold in Havana. She is also socially involved in youth funds.

It can be a super clash between Gerbi and German Martyna Trajdos who won the European Games in Baku, as well as flagbearer for Germany at the closing ceremony. She won the Grand Slam Tokyo in 2015. In her best year, she won bronze at the Grand Slam Paris in 2015 and 2015 and silver in Abu Dhabi as well. Trajdos is inspired by her friend and former World Championships medallist and European Champion Loic Korval. Trajdos is going to take the gold medal once she has defeated all the favourites at least once.

Austrian Kathrin Unterwurzacher won the European U23 Championships in 2011 in Tyumen which seemed like the start of a great international career. She started to win international medals and victories and conquered a place in the World top 10. She won gold at the Grand Prix Tbilisi in 2016.

Munkhzaya Tsedevsuren was fifth at the London Olympic Games. The Mongolian judoka won various World Cups including in Cairo and Sao Paulo, and three in Ulaanbaatar. She missed the 2014 World Championships to have a baby but bounced back with wins at the Asian Championships in Kuwait and Grand Slam Tyumen in 2015.

Anicka van Emden is a top judoka who has won 12 Grand Slam medals. She also won two bronze medals at the World Championships in 2011 and 2013. She took two European medals and was 2008 European U23 Champion. She has been in the top 10 since 2009 and is linked in the same pool with Trstenjak.

Alice Schlesinger, born in Israel to a British mother, won bronze at the 2009 World Championships for Israel and finished seventh at the Olympic Games in London. Alice won the U23 Europeans in 2009 and has 3 European bronze medals. She switched to Great Britain and came back strong with victories in Dusseldorf and the Grand Slam Baku.

Brazilian Mariana Silva won bronze at the Pan American Games in Toronto in 2015. The middleweight won a few World Cups starting in 2014 in Buenos Aires and defended the title in 2015. Silva won the World Military Games in 2015 in Mungyeong, and also won silver at the Grand Prix Samsun. With all the miracles of the world, which is not impossible in Rio, Silva may be able to perform well.

Italian judoka Edwige Gwend won the Grand Prix Tashkent in 2015. Gwend won the European U23 Championships in 2010 and earned silver at the Senior European Championships in Vienna. She claimed various major victories and collected over 15 world level medals. She also competed at the 2012 Olympics and is determined to improve her performance from 2012.

The U63kg category is the only division where there is no Olympic medallist in the field. Meanwhile, the U48kg, U57kg and U78kg divisions each have four. Now it’s up to Clarisse Agbegnenou, Tina Trstenjak, Yarden Gerbi or the others to take their maiden Olympic medal. The aforementioned won a world title in this Olympic cycle. Judokas Miku Tashiro, Anicka van Emden, Munkhzaya Tsedevsuren and Alice Schlesinger also medalled at World level. 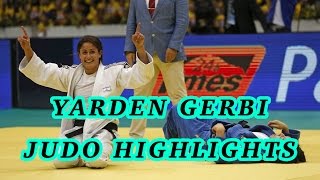 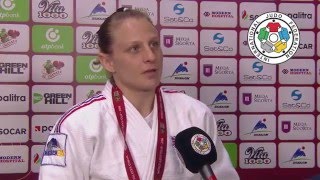 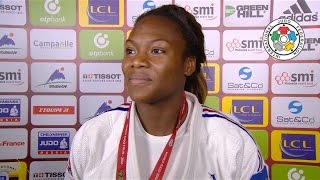