The teams of the Netherlands, Japan and Italy were the best nations at the European Cup for Juniors in Gdynia, the new location for the annual tournament U21 years in Poland. The Dutch juniors collected 12 medals including three titles, the same amount of gold for Japan and Italy. The host nation was a bit unlucky with two lost finals, but a total of 7 medals wasn’t so bad and better than last two years.

Italy’s lightweights started well in the tournament, although 2 participants U44kg is no tournament at all, but Elisa Adrasti formally grabbed the gold. Also U55kg no rivalry with just 8 judoka. In Leibnitz, Lignano, Paks and Athens at least 20 judoka in this category. Italian Andrea Carlino took the gold, just like in Ligano in April. In the women U48kg division gold for Italy’s Michela Fiorini who took her first victory in this age category U21. In the final she defeated Amber Gersjes (NED). Gold for Germany U52kg by Patrycia Szekely who defeated Myriam Blavier (BEL). Japan won their first gold medal U57kg by Yui Murai, a former Asian champion. Usually the new generation juniors comes to Poland for the tournament and training camp.

Lubjana Piovesana is in shape, the British won her second European Cup in a row. She overcame Michelle Benjamins (NED) in the final U63kg. Hilde Jager won bronze and Danish Laerke Marie Olsen was again able to take a bronze medal like in Paks. Finally it was The Netherlands taking the gold medal as Natascha Ausma won her final against Sara Rodriguez of Spain. World bronze medallist Ausma is back from an injury and continues her medal hunger. The Dutch are traditionally good in the women’s categories U63, U70 and U78kg. This time Ilona Lucassen won her third European Cup this season leaving Polish Paula Kulaga with silver. The heavyweight division had an all Japanese final won by Mao Takikawa.

In the men’s categories Artem Lesyuk of the Ukraine took gold U60kg with Japanese Fujisaka (not the same as Budapest Grand Prix bronze winner) and two Dutch boys on the podium as well. Portuguese David Reis won his division U66kg defeating Petar Zadro of Bosnia. A second gold for the Ukraine in the best seeded category. Hievorh Manukian was the winner among 35 men, a good performance by Manukian. Tim Gramkow of Germany won his first European Cup, in Germany he is bronze medallist. On Sunday he defeated Jesper Smink (NED). The Netherlands lost four finals, but was still on top of the nation ranking.

For the first time since 2013 an Estonian judoka was able to take the victory at a Junior European Cup. Mattias Kuusik had a super day and defeated Baltic colleague Rokas Nenartavicius of Lithuania in the final. The last Estonian who won gold was Hennrich Sildveer in 2013, even in won country. The last man who won abroad was Grigori Minaskin in 2009. He is now qualified for the Olympic Games.

Who else than Dutchman Simeon Catharina won the category U100kg, although it is not as obvious as the figures show us. His third victory of the European Cup season and the World Cadet Champion is just 18 years. Although with 11 participants, the field was rather poor. Japanese Hyogo Ota won the heavyweight category against another Dutch talent, Jur Spijkers.

Next week more competition is expected in Prague followed by Berlin in two weeks. 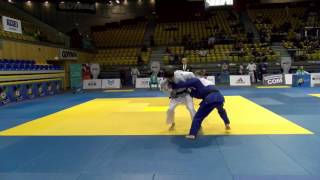 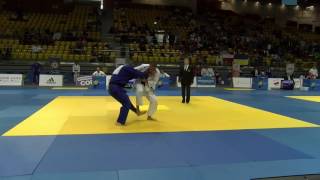 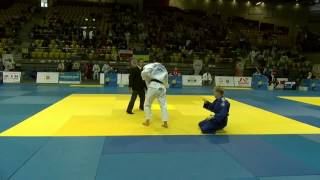