Nouchi Aimi of Japan came into the competition as an unknown but leaves Tyumen with one Grand Slam gold medal after beating Lisbon European Open bronze medallist Daria Davydova of Russia. Nouchi followed up Munkhzaya Tsedevsuren (MGL) as winner and in 2014 Kana Abe won the first edition in Tyumen.

The Russian judoka lost out to a waza-ari score as St. Petersburg Junior European Cup bronze medallist Nouchi performed well without looking as polished as her teammates but still the young fighter won gold which will endear her to the Japanese selectors and public who were watching in vast numbers in the crowd and on television. Nouchi also won the World Junior team title with Japan last year.

In the first bronze medal contest Junior World Championships silver medallist Diana Dzhigaros (RUS) squeezed past two-time African Championships bronze medallist Helene Wezeu Dombeu (CMR) by a single yuko to win her first Grand Slam medal and add to Russia’s medal haul which by now was into double figures. The second bronze medal contest featured Rio-bound Mia Hermansson (SWE) and 21-year-old Olga Kriukova (RUS) and it was all over after three minutes as the Swedish fighter rounded off a worthwhile exercise before the Games by scoring two waza-ari. Top seed Hermansson took the lead with a ko-uchi-gari for a waza-ari and scored a second from a ko-uchi-gake for a place on the podium in Tyumen. 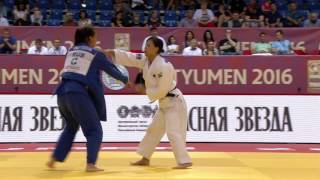 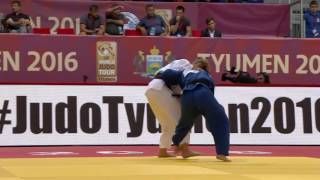 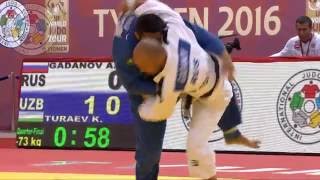