TWOJ, the world of Judo, by Bob Willingham

In advance of the Olympic Games in Sydney, Indrek Pertelson of Estonia is one of the medal candidates. He started judo when he was seven. Aavo Pohgala, who was originally the Soviet Union Junior Coach, has been the man I have spent most of my judo time with. He became my personal coach and I have trained with him for seventeen years.

Tell us something about Judo in Estonia

Estonia covers around 45,000 square kilometres, a similar size to Ireland, and about 2,500 people practice Judo in the 25 to 27 clubs that exist there. We have nearly 100 adults who train every day. Our club in the Capital, Tallin, has special training days when many people from other clubs in Tallin come to gain extra experience.
On the Coaching side we don't yet have a strong, clear and structured system but we are creating a system. Our national coach also coaches the juniors and his older brother is national coach for youth, although sometimes it is the brother who travels with the juniors. Estonia is small and so we don't have as many people as Russia which can produce two or three players in each weight category. To make the best use of our national reserves of people we have to concentrate on those who can really prove themselves.
Our top level players do a wide variety of training: cycling, running - distance and sprints (sometimes before breakfast) - and stretching. In summer time it's not so regular. We also play football, basketball, and many ball games.

One good thing for Estonian athletes is that the parliament, I think it was 4 years ago, agreed that high level sportsmen and women will be paid by the government for their preparation and their daily meals. The government also has the freedom to reward medal winners if it wishes. They can choose to put a value on each medal.
For me personally this means reasonable security at the moment but this will not be the case when I stop judo. As I said this money is adequate for good preparation and training, but it's not enough for any additional expenses.

When did Estonia become independent from the USSR?
In 1991 (I think it was the 16th of August) fortunately it was almost entirely peaceful, only some tanks, but they didn't shoot. It was the only way and I am very happy it happened. In terms of judo it took time to really understand the difference between a big country system and a small country system. In Estonia you need to do a lot more for yourself. You need to find sponsors, you need to prepare by yourself. It's about self discipline but I think that's good. Of course in the Soviet Union the judo system was almost perfect (I was 4 times Soviet Union Champion, and Junior European Champion in 1990 and 1991 under their system). All those coaches and the depth of players, the preparation; it was all planned down to the smallest detail. Your obligation was only to fight and win, no more. There are many things that in Soviet Union times you waited to have done for you, but now as part of a small country you must get on and do them for yourself. In Estonia you are like other people, a normal person, if you want success you must work for it.

So how are you personally preparing for life after judo?
I am studying law. I started in 1994 but I am already on a special programme. The last two years have taken so much energy, though, as last year I was thrilled to become a father for the first time to my boy, Marcus. He was 4.3 kilos at birth (in Estonia that's average) Sometimes when he was younger I would get up for the night time feed but last year this was difficult because I was very busy. If you love your child and your wife though, you accept this and it's not really so hard. You need to put your family before your study, but now he's older it's OK anyway. 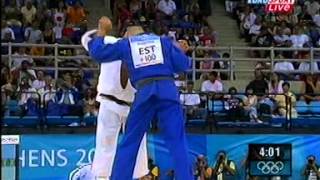