TWOJ, the world of Judo, by Matt Carter

Triumph for Japan and disappointment for the host nation were two of the main stories today as Japan's dynamic -73kg player, Masahiro Takamatsu captured the first gold medal of these championships for Japan to go along with the 3 silver and 5 bronze that they've amassed after three days of competition here at the 2000 HYUNDAI Junior World Championships.

Meanwhile, in the women's -70kg, Tunisia's Yousra Zribi made it as far as the semi-finals after an exciting ippon victory with Sukui-nage over Gonzal Aquilera of Cuba in the quarter-finals that brought the enthusiastic crowd to their feet. In the semi-final match up against Svia Tsimashenka (BLR), Zribi was injured when she was thrown by the Belarusian. Sadly for the home crowd, Zribi had to be carried out on a stretcher with what appeared to be a neck injury (although unconfirmed at the time of writing), cutting short Tunisia's chances for a medal on home soil.

-70kg
The quest for gold in the -70 kg class began quickly with Zribi looking strong against Dimitra Lazarou (CYP), whom she threw for ippon with a lovely Harai-goshi. This set up the match against Aquilere, which she won with a very nice throw to score ippon and excite the crowd. Zribi looked to be a strong candidate to reach a spot on the podium, but in her semi-final bout she was taken by surprise by the eventual silver medallist from Belarus who threw her hard with a huge Te-guruma to end the match, and the competition, for Zribi who officially finished in 5th place after not taking part in the bronze medal fight. The bronze was automatically awarded to Japan's Yoshimi Shichijo. The Cuban girl fought well in the repechage and met Haixia Wang (CHN) in the other bronze medal final. Wang scored a koka on an O-soto-gari to go along with a chui that the Cuban had received earlier in the match to claim the bronze medal.

The final featured Natalia Pissareva of Russia against Tsimashenka. Pissareva had previously beaten Wang in the semi-finals with a skillful Juji-gatame and was out for gold in the final having disposed of Italy's Erica Barbieri, Canadian, Catherine Roberge and Samantha Lowe of Great Britain. In the final, Pissareva attacked with a typical Russian-style pick-up technique only to have the Belarusian hook her right leg into the Russian's left leg to block the throw, this set Tsimashenka up for a powerful O-uchi-gari, winning the match and the title for Pissareva.

-78kg
-78kg, with only 23 competitors, was the smallest category of the day, but saw some big ippon throws from Raquel Prietro (ESP), who threw Deborah De Souza (BRA) with a perfect Ippon seoi-nage in the semi-finals as well as Anastasi Matrosova of the Ukraine earlier in the day. Prietro looked to be in fine form as she fought her way into the final, beating eventual bronze medallist, Megumi Nagase (JPN) in a strong tactical first match and then going on to throw Annick Rouleau (CAN), Ahlem Azzabi (TUN) and De Souza. It was in the final that she met her match against Matrosova. The tall Ukrainian seemed to be in command for much of the fight, but Prietro almost caught her with a fine Sumi-gaeshi attempt two minutes into the final. However, some 25 seconds later, Matrosova scored with a well timed Kata-guruma from a very low position to take the championship. The other bronze was taken home by Eva Brisseni of France who won some key fights in the repechage before defeating De Souza of Brazil.

-73kg
The men's -73kg group was perhaps the most exciting of the day, with a number of potential gold medallist emerging from the morning's preliminary rounds, not the least of which was Russia's Djami Abouladze. Abouladze had been impressive all day. He scored decisive victories over some tough opposition including Constantin Cojoc (ROM), whom he threw for waza-ari with a powerful Ko-soto-gari and Manue Gamburyan (USA) who was held down with a vice-like Kuzure-kami-shiho-gatame. He also came out on top of In Sub Woo (KOR) and Jeremie Ruegsegger (CAN). Also impressive was Rusian Lushchykov of the Ukraine. Luchchykov beat a strong Armerian by the name of Varuzhan Israyelyan as well as the Italian and Portuguese fighters en route to a spot in the final. It was Lushchykov who finally upset Abouladze in the semi-finals with what appeared to be a choke. Abouladze was justifiably disheartened by the loss, by regained his composure to come back and take the bronze from Renan Pinto of Brazil.

On the other side of the draw there were a couple of other medal hopefuls including Guillau Elmont (NED) whose incredible agility made him a threat coming out of the prelims. Equally impressive was Daniel Mallaun of Austria who threw Pinto (BRA) with a rare Obi-tori-gaeshi earlier in the day to excite the crowd. Czech player, Tomas Muzik also had flashes of brilliance, but it was Japan's Masahiro Takamatsu who turned the most heads. Takamatsu, a first-year student at Tsukuba University in Japan, had a number of tricks up his sleeve including a brilliant Ippon seoi-nage to Ko-uchi-maki-komi combination. Takamatsu simply refused to be thrown and twisted out of some impossible positions. He was equally at home on the ground and had a nice transition into San-kaku-jime. On his way to the gold medal, he disposed of Elmont, a tough Georgian and Turan Musayev (AZE).

The final pitted Takamatsu against Lushchykov, the two most dynamic fighters on the day. Both fighters were rather short in comparison to the others in their category, but they more than made up for it in strength, speed and ability. Each judoka attacked relentlessly throughout the match; Kata-guruma, Uchi-mata, Seoi-nage and Te-guruma were all attempted without success. Then the Japanese scored what would turn out to be the decisive koka. He came in for Ippon seoi-nage which was resisted bt the Ukranian who dropped his hips and shifted his weight onto his back leg, the instant he did this, Takamatsu changed the direction of the technique, dropped his right arm behind Lushchykov's right leg and launched in with Ko-uchi-maki-komi to score the point. A last second twist from Lushchykov prevented the throw from scoring much higher. Takamatsu, who is also the reigning Senior National Champion in Japan by virtue of winning the Kodokan Cup earlier this year said afterwards that he is very happy with his gold medal. His coach added that he is now in line to represent Japan at the next Olympic Games in 2004 in Athens, Greece. The second bronze medal was awarded to Daniel Mallaun of Austria, who had a strong day and won his final match with a nice Tomoe-nage against Israyelyan (ATM).

On a side note, Peter Lomax (GBR) was a last minute addition to the British team, filling in for Britain's number top seeded player who was unfortunately bitten quite seriously by a dog on the morning of the day he was to travel with the team to Tunisia. Despite the short notice and his being 3 kilograms overweight when he arrived in Tunisia, Lomax looked up to the challenge in a hard fought victory against Chingi Baymatov (KAZ) in the second round of fighting. Lomax was later defeated by the Romanian figher, Cojoc.

-81kg
The -81kg category was a large one with 36 competitors in it. The preliminaries saw a number Te-guruma-style pick ups, which was a trend that continued into the block finals starting at 4:30pm. In the first semi-final Grigori Mamrikishvili of Georgia met Yong Woo Kwon of Korean. The Korean had a lot of supporters in the audience, but it wasn't enough as the strong Georgian managed to beat him out of the final. The other side of the draw featured a semi-final that included Roberto Meloni (ITA) and Maratbek Myktybekov of Kazakhstan. Meloni had a huge quarter-final and upset a determined Takashi Suzuki of Japan. The Italian went up by waza-ari in the early stages of the fight and managed to hang on despite a last minute frenzy of attacks from Suzuki. The final pitted two warriors against each other and it was the Georgian who struck the decisive blow at the 1:55 mark with an amazing Ura-nage to win by ippon. Earlier, the first bronze medal between Kwon and Jason Jones of the Netherlands was won in an incredibly exciting match that went back and forth for the full 4 minutes, with the Korean having just enough to hold off Jones in the final 10 seconds for the bronze. Roland Kasper (AUT) was the other bronze medallist, defeating Myktybekov with a waza-ari. 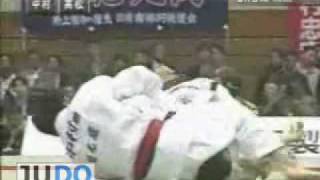 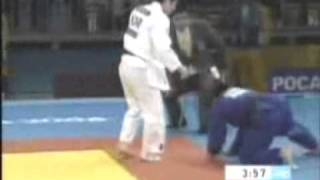 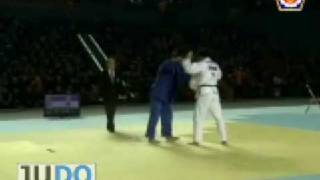