At the end of a gruelling contest the buzzer sounded; Karina Bryant wheeled around to the photographers and punched the air; she was European champion again. Bryant's gold topped off an outstanding championship for the women's team who plundered another three silvers to finish second behind the French women. But for the odd contentious referee's decision they could even have swaggered home with four golds.

From the old dome stadium, once used by Adolf Hitler to address his followers, to human Olympic rings, the Poles staged an attractive Championship. Children in coloured judogi (the rings), aided by champions of the past, treated the spectators to some eager demonstrations in the Opening Ceremony. There was even a decent crowd, that at times created quite a racket. And to top it off, once again, believe it or not, I copped a tongue-lashing. It was a great tournament.

From the outset, Britain's women were on fire and on Thursday three out of four qualified for the semi-finals. Bryant sliced through her half of the draw in the +78kg like a hot knife through butter. The Polish fighter, Maigor Gornicka had the audacity to take the lead, scoring koka with maki-komi. But Bryant bided her time before emphatically silencing the crowd with a big o-goshi for ippon. Next up was a Yugoslav, Mara Kovacevic, but she was no match for the Camberley Crusher and was disposed of with kouchi-gari from an uchi-mata twitch.

Bryant looked dominant and it was clear that it would take something special to beat her. In the semi-final, Tzwetana Bojilova of Bulgaria just didn't have it. She was dumped for waza-ari with tani-otoshi and no sooner had she got up, she went over again with ouchi-gari. Bryant was now within touching distance of her second title in three years. Having bulldozed her way there she had to display cunning and refinement to clinch her place on the top tier of the rostrum. Irina Rodina of Russia, the reigning champion, was a robust opponent with some willing drop seoi-nage attacks but she doesn't have Bryant's class. It was settled eventually by a penalty, the decisive moment coming at a time when Bryant harried the Russian into excessive passivity. She was delighted at the end and said "it feels really good" before something distracted her and abruptly terminated my attempts at an interview.

Chloe Cowen faced the most exciting drama in the -78kg as she was not only chasing a title but also Olympic qualification. It was a small field of just 13 women but that is not to suggest it was easy because they were the best 13. Eight had already qualified for the Olympics and the other five were the only ones still in with a chance of claiming the last place. Cowen completed an Iberian double in ne-waza in her first two fights. She pinned Esther San Miguel of Spain with kami-shiho-gatame and then rolled Sandra Godinho of Portugal into sangaku-gatame. Cowen's ne-waza is really strong and few fighters can compete with her on the ground. Personally I would never risk rolling around the mat with Cowen...but then again...

By the semi-final stage there was only one fighter left who could still deprive Cowen of that coveted place at the Olympics, Anastasia Matrosova of Ukraine. In a winner takes all contest she faced the Ukrainian in the semi-final. Matrosova had scored a surprise victory against Simona Richter of Romania and was looking very powerful. Cowen mastered her, though, and scored waza-ari with kochike-taioshi to finally clinch her ticket to Sydney after four agonising months in an unsecured qualifying position. In the final she met Celine Lebrun of France, the reigning champion and only European medallist at the World Championships. Lebrun started slightly better and when Cowen missed with a foot sweep she was pushed backwards for waza-ari, although that score may have been a little generous. Cowen fought back and scored waza-ari herself with tani-otoshi to take the contest to a decision. It had been close but she lost unanimously and it was disappointment once again with her third silver to add to another two bronze medals at Europeans but still no gold. Afterwards she admitted to having "mixed" emotions. "Obviously I'm disappointed," she said, "I felt my throw was an ippon. But I'm over the moon about the Olympics. I've worked so hard and there was a lot of pressure."

If she has been waiting a long time to add a gold to her European collection, Kate Howey has been waiting even longer. Prior to these championships she had two silver and five bronze medals. Through the -70kg qualifiers she looked unstoppable. Catarina Rodrigues was armlocked with juji-gatame, although in truth the Portuguese put it on a plate after attempting tomoe-nage and then leaving an arm straight up in the air with Howey standing over her. It took the Briton a split second to recognise the gift but when she did she almost snapped it off. After smashing Tetyana Brouletova of Ukraine with her trademark morote-gari, Howey couldn't wait for the semi-finals.

She had a tough draw against Ylenia Scapin of Italy and for a couple of minutes they were deadlocked. Then Howey pulled a brilliant uchi-mata out the bag and qualified for her first European final since 1991 in Prague. She had looked the class act in the field and, with Ursula Martin of Spain surprisingly, and somewhat fortunately, squeezing past Ulla Werbrouck of Belgium, she appeared all set to end her European drought. It was not to be, though. Howey dominated and scored yuko with tomoe-nage but was thrown for ippon with osoto-gari. Television replays suggested it should have been no more than a waza-ari as she landed on only one shoulder, but the referee does not have the benefit of a replay.

Howey was distraught having once again suffered heartache. She said: "Maybe it's just not meant to be." Well let me assure you all, Howey is too ruthless and talented for it not to be. In both the semi-final and final she picked up her opponents with morote-gari just after the referee called matte. On both occasions they came crashing down to the mat, flat on their backs, before Howey stood up looking slightly bemused at the lack of an ippon score. One day this will to win will land the top medal in Europe, and hopefully the Olympics. 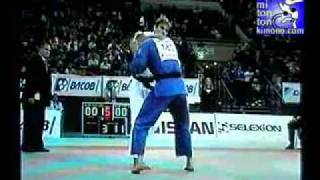 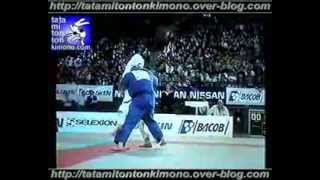