Former world judo champion Wang Ki-Chun announced to retire from international competition and prepare for a coaching career. Wang said he will end his national team career and work as a coach starting next year. He didn't qualify for the Rio de Janeiro Olympics to be held in August.

Wang, also the 2008 Beijing Olympics silver medalist U73kg category, was looking for his third Olympic appearance in Rio. Now competing in the U81kg division, Wang didn't even get past the second round at the Olympic trials. Lee Seung-Su took the Olympic berth.

For his coaching career, Wang said he opened a judo gym in Daegu on Friday. However, he will compete until the end of this year because of his contract with the Yangju City Hall judo club. Wang added that he is thinking of competing for another club, but nothing has been determined at this moment.

"He will remain a Yangju City Hall club judo athlete for a while," said the club's head coach Jang Moon-Kyung. "As a coach, I'm willing to help him in his new career."

Wang, 27, first started judo in 1995 and rose to stardom after taking gold U73kg at the 2007 World Judo Championship in Rio. The following year, he grabbed a ticket to the 2008 Summer Games after beating defending Olympic champ Lee Won-Hee. However, Wang settled for silver in Beijing after injuring his ribs in the quarterfinals.

Wang then triumphed at the 2009 worlds in Rotterdam, the Netherlands, and added a bronze medal at the 2010 worlds in Tokyo. In his second Olympics in London, Wang failed to reach the podium as he lost the semi final to winner Mansur Isaev and got injured to his elbow, but still fought the bronze medal fight against Ugo Legrand which he lost.

In 2013, Wang moved up U81kg and created a compelling rivalry with the 2012 Olympic gold medalist Kim Jae-bum.

Kim announced his retirement in May. 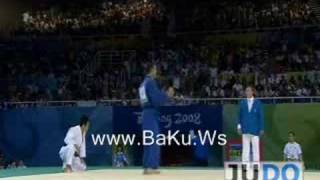 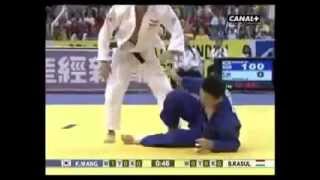