At the last European Cup for Cadets of the season, the Russian cadets gave their mostly European competitors a good spanking. At the European Cup in Coimbra in Portugal the Russian team was able to secure nine gold medals, nine silver and nine bronze. Italy was the only country that could show a little domination as they took three gold medals and still two silver and eight bronze medals.

Biagio D’Angelo won gold for the Italians U55kg and booked his second victory of the season. It was one of the few finals without a Russian as D’Angelo defeated French Yhonice Goueffon. Italy was actually spoiled U57kg with an All Italian final between Flavia Favorini and Federica Luciano. Both deserve gold for their fantastic Italian names, but it was Favorini taking the gold after five wins in a row among the 33 young women. Chiara Lisoni took a gold medal U63kg. In the final Lisoni defeated Israelian Gili Sharir with Nadia Simeoni at the bronze stage. Dali Liluashvili won bronze after she overcame Italian Elisa Toniolo. Enough Italian power.

Israel also had a successful weekend with gold for Gefen Primo women U52kg. She won her fourth medal of this season and third gold. Croatian heavyweight Helena Vukovic won the +70kg class against Annalisa Calagreti of Italy. On Saturday Belgian champion Lois Petit won her second gold medal of the season, although she had booked victories in Eindhoven and Erfurt as well, two tough tournament earlier this year. Petit defeated World Cadet Champion Olga Borisova in the final U44kg.

All other nine categories were won by Russian athletes. Dzhafar Kostoev won again U90kg. In his final he defeated Danish Mathias Madsen. Kostoev booked this third victory which puts him in the top of the European Cadets. The same situation for Madina Taimazova who won the category U70kg, also for her the third victory this season. Portuguese Patricia Sampaio was her victim this time. Previously Taimazova won in Tver and in Berlin. Last year she won bronze at the World Championships.

The European Championships for Cadets will take place in Vantaa in Finland. Check who are the most successful cadets this season. 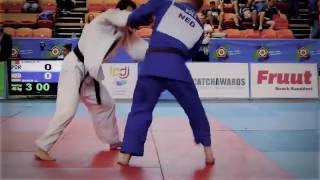