Misato Nakamura captured the gold medal at the Masters in Guadalajara after she won the final against Natalia Kuziutina of Russia. Nakamura won by oseikomi after great ashi waza, a footsweep in the last minute, she felt straight into the oseikomi and hold it for 20 seconds.

Maybe not a surprise that the Japanese world champion won, but Kuziutina had a great day and was equal one minute for the end. What a comeback for Natalia Kuziutina from Russia. Kuziutina defeated Nakamura last year at the Masters in Rabat in the semi final, but the Japanese made 5-2 this time and took the second gold medal for Japan in the women’s division. Nakamura won the Masters in 2010 and 2011, Nishida won it in 2012 followed by Kelmendi en Kuziutina last year. Still it’s a great sign for Russia that Kuziutina may be able to get her past level back at Games time.

Italian Odette Giuffrida won her match against Andreea Chitu (ROU) by wazari, after a takeover by uchimata. Giuffrida lost five times to Chitu but now comes back 5-4. French Annabelle Euranie won the first bronze on penalties her in contest against Erika Miranda (BRA). Giuffrida lost to Miranda in the second round, but in the end the Italian was the happier judoka with bronze and Giuffrida prolonged her bronze medal of last year. 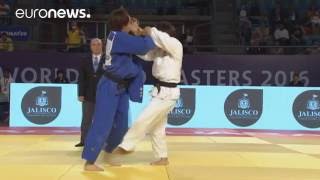