World silver medallist Maria Bernabeu (ESP) returned to the IJF World Judo Tour medal podium in Baku for the first time since her heroics at the sport’s 2015 marquee event in Astana, Kazakhstan. Bernabeu blasted past Havana Grand Prix bronze medallist Maria Portela (BRA) in the final as she surprisingly overpowered the Brazilian in osaekomi for 20 seconds with a sankaku-gatame hold.

In the first semi-final Pan American Championships bronze medallist Maria Perez (PUR) was beaten by Bernabeu who was in devastating form as she won by ippon in just 47 seconds. In the second semi-final Portela beat veteran Juliane Robra (SUI) by throwing the Swiss judoka for a waza-ari score and holding down her opponent for 15 seconds to confirm her place in the U70kg final.

The first bronze medal was claimed by Pan American Championships bronze medallist Elvismar Rodriguez (VEN) who entered her name in the record books by defeating Robra. Teen starlet Rodriguez defeated her opponent in their previous meeting and made it 2-0 in their head-to-head series as she won by ippon after 44 seconds. The 19-year-old defeated the 33-year-old and a beaming smile appeared on the face on the Venezuelan who has unlimited potential. The second bronze medal contest was won by Perez who registered the sole score in her contest against African Championships winner Assmaa Niang (MAR) for an excellent result for Puerto Rico. 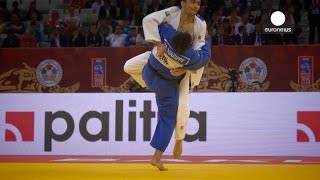