The women of Poland became European Champion, an amazing result for the organiser of the next European Games. The Polish women defeated Russia at home in Kazan. Poland was also in the final of the World Championships last year in Astana. This time they won the gold medal for the first time in the history of Poland. Even the men had never won this title but they cheered as much as they can on the tribune. The Polish men won the bronze today in Astana.

European bronze medallist U52kg Yulia Ryzhova opened the final with a victory over Agata Perenc. But Poland struck back with a victory for Areleta Podolak. In the golden score U63kg Agata Ozdoba got a penalty for passivity and Russia took the lead by 2-1, but Katarzyna Klys took the vital victory to be equal. The last match was the decision and Katarzyna Furmanek launched an amazing tomo-nage against Chibisova, a direct ippon within the first minute of the match. An explosion of joy for the Polish women for this historic medal.

Germany and France won the bronze in Kazan. Germany defeated the Ukraine for bronze whilst France defeated Croatia by 4-1. 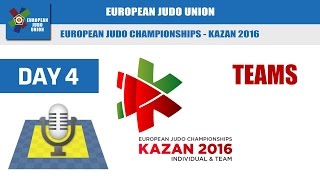