French World Champion Gevrise Emane can’t stop adding prizes. Soon she will be 34 and going for another Olympic medal. At the European Championships in Kazan she defeated the surprising Esther Stam of Georgia in the final. Stam was the sensation though today and secured an Olympic ticket despite her severe neck injury.

Who thought she would be have been in the European final, and who thought that Gevrise Emane would take the European title in a category with the World Ranking leader and triple European champion Kim Polling.

It was the other “Dutch” woman Stam who was the surprise beating Roxane Taeymans, Laura Vargas Koch and Szabina Gercsak. In the semi final she even surprised Fanny Estelle Posvite. Emane won her four matches against Aleksandra Samardzic, Sally Conway and Kim Polling. The sixth Dan Emane won three World titles and now added her fifth European title, three U70kg and two U63kg.

Hungarian super talent Szabina Gercsak is a trap for everyone was the dark horse for a medal. Although for bronze she had to fight Kim Polling who beat her before, but after 20 seconds she led by yuko and within a minute she destroyed Polling with risk for both, but Gercsak is a master in take over. Polling coujldn’t throw the tall Hungarian and with the opening Polling offered her she hooked in with Ko-soto for a devastating ippon. Everyone should know the World Junior Champion by now, Polling took the risk and lost.

A right ko-soto gave Fanny Estelle Posvite the lead in her match for bronze against Sally Conway. Posvite had lost the semi final against Esther Stam, but in the end won the bronze medal. 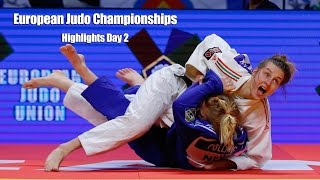