When you think it can’t be better compared to last year, the Dutch team now captures five gold medals in one day, instead of two. The Dutch dominated once again the Junior European Cup in Coimbra. Eight medals, five gold, one silver in a Dutch final and two bronze is the result of a great day in Portugal. With a team of 37 judoka you can expect a few medals, but the odd thing is that some of the winners of last year competed but didn’t finish on the podium this time.

The Dutch have a choice when it comes to juniors. Amber Gersjes and Roy Koffijberg, winners of last year and European Champion both finished seventh, but their gap was filled smoothly. In their new categories U48 and U60kg new Dutch junior won. Tornike Tsjakadoea, former Georgian youngster picked up the gold in the final against strong Italian Manuel Lombardo. Dutch Junior Kim Akker won the title U48kg against Portuguese Patricia Matias.

Spain was good in the lightweight categories where Oriol Subirana won U50kg against Andrea Carlino (ITA) and in the women U40kg it was the other way around; Italian Elisa Adrasti was the best in a pool of five where Spanish Mireia Lapuerta finished second.

Canada could again cheer for Jessica Klimkait U57kg, the super talent this time defeated British Jodie Caller for gold. The remaining categories were all for Dutch athletes. Twan van der Werff won in a Dutch final against Roy Schipper U66kg and U73kg it was Kevin Bakker who took the gold medal in a the final against British Daniel Powell. The Brits won three gold medals last year, now two silver and two bronze on the first day. The last final where a Portuguese athlete qualified was U52kg, but Mariana Esteves, the winner of last year in Coimbra now had to bow for Dutch super talent Jorien Visser. She’s just 16 and won European and World Championships medals. Visser is one of the pearls of Dutch judo, let’s hope she is brought slowly despite her talent. 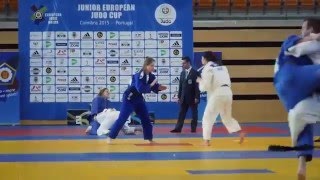