About 300 athletes from more than 50 nations will be present at the African Open in Casablanca, one of the last qualifying possibilities and the last in Africa, excepted for the continental championships. The African Open in Morocco will obviously present a strong home team winning four medals last year and five in 2014. Assmaa Niang and Rizlen Zouak even medalled in both editions.

Again there will be strong equipe from France, that won the medal table in both occasions with 6 titles each. One of the winners last year was Gevrise Emane who had an excellent preparation on the World title later that year. This year many French talents will come to Casablanca.

There will also be a strong Italian team, Portuguese top athletes and 17 judoka from Azerbaijan and of course 16 athletes from neighbor Spain including last week’s winner in Lima Laia Talarn. Enough athletes who will need the points for Olympic qualification.

Some of the highest seeds are Dutch Jeroen Mooren, French Guillaume Chaine who won three World Cup last year, Antonio Ciano from Italy, Algerians Benamadi and Bouyacoub. Belgian Isle Heylen is still fighting for each point, so is Assunta Galeone who won silver in Rome this year and many more. 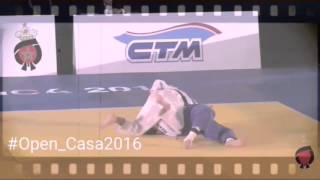